Again I am a little late on the bandwagon here, but this article by Justin Moyer of the Washington Post exemplifies an attitude common to genre Romance readers and writers in the mainstream. The Sneer.

I am neither a writer or reader of the genre — at least at this point in time — but it does steam me that the tone is, offhandedly, dismissive of women, of which I am one, and the emotional needs and sexual fantasies of some, though not all, women.

What causes the sneer?

Well, the stereotype. I really doubt the sneerers have read enough of the current crop to realize the diversity, breadth, and robustness of the Romance market today. (I think of it as a dancing multi-armed Indian fertility deity.) In fact, I doubt they’re read more than one or two of the books, period. So where does the contempt, and often the contempt of women, come from? I believe it’s the visual representation, what’s on the covers of the books on display in the bookstore, the trade show, the author websites. It’s the more florid representations, specifically, the ones that shout the loudest and overwhelm the rest. You know the kind I mean.

Readers and publishers from mainstream to indie might say these covers sell (even though they may be in no way representative of what’s going on in the book, save there’s a man, and a woman, and there’s passion between them). But do they sell because it’s what readers expect, even if said reader doesn’t like them or is insulted by them? I’d certainly be insulted by them (not the least by their artistic merit) because they imply that a publisher thinks so little of a book, or an entire genre, that it slaps a cookie-cutter illustration on it that might fit on at least fifty or more other books as part of a mass production line. It is in fact contemptuous of the reader, to think they don’t deserve something more intelligent and sophisticated.

For example, here are Diana Gabaldon’s Outlander series books, which are shelved alongside the “general best selling authors” in most grab-and-go book sections, like you’d see in a Rite-Aid or an airport concourse newstand. 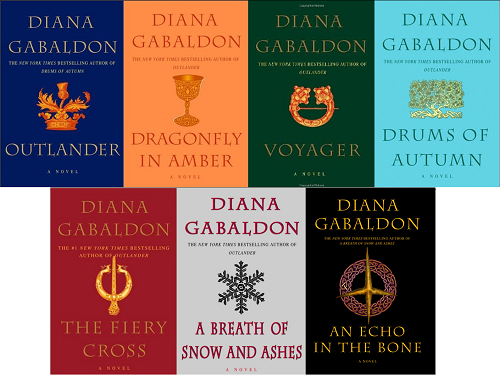 Classy, no? Name recognition, a discrete Celtic design element, and title. You’d have to read the blurb to tell it’s a meaty, historic time-traveling romance with fantastic elements.

Here’s John Green’s “The Fault in Our Stars.”

Again you have to read the blurb to see what the story is about, assuming you haven’t heard the hype. Design is young and lively in feel, but not too teenish. An adult could buy it, carry it around without feeling awkward.

Some books by Stephanie Perkins, a female YA writer, in case one would think John Green has more respectability in the genre because he is male. all of which are boy-girl romances: Aside from the choice of title, they don’t exactly scream ROMANCE! either. The Isla book looks like it’s about a girl’s adventures in NYC, for example. Actually, all of them imply adventures in glamorous locations in addition to the romance.

Now here’s a Highland romance I picked at random:

This book makes no bones about what it is, by its title, the florid typeface of the title, and the uncanny waxed perfection of the male model. It’s published by Macmillan as part of their mass market romance line. Being a large publisher, I would say they had total say over the packaging. The book (I haven’t read it, so am neither criticizing the author or the story) and by extension the series, might be aslucrative and intriguing as Outlander, but the general public, or a TV producer, is not gonna pick it up to find out because it just screams all the cliches of the genre. This kind of  is what people sneer at when you mention “romance.” If I could give it a name, I’d call it, “The Torso.” What they used to call Beefcake in the 1960s, and Fabio in the 1980s.

I know this is only one type of cover the big publishers favor. Other houses — the Harlequin Silhouettes, for example, have their own standards. But all are clear about what they depict and what the reader can expect. Which is good for both publishers and readers — the former make money, the latter are telegraphed visually with what kind of story they’re getting. But it also means a lack of crossover.

Here’s a short snippet of what will be the mildest story in the collection, which is pony more by association (it has to do with shenanigans on a carousel) than character.

She put one foot into the cold stirrup of the saddle and hoisted herself onto the horse’s back. The quilts helped deter the cold. As a child, this horse had seemed huge to her. Now she knew it was nowhere near the size of an actual stallion, even though it was large enough still to accommodate an adult…or two.

She sat in saddle but faced backwards, resting her back against the pole.

She nodded as he came back with the harness. It was something he had crafted just for this. He buckled one long piece of leather around her waist, then down and around to secure her to the horse’s barrel, then crossed a second one over her breasts to secure her to the pole. “Sorry for the kink, darlin’. But we don’t want you falling off now, do we?”

“Oh no, of course not.” Another strip secured her wrists at the small of her back. She was helpless. The feeling was delicious.

He kissed her, his mouth was the promise of pleasure to come. He kissed her breasts. She felt her flesh suffuse with sensation like ripples on a pond. Then, a blindfold, a length of dark silk that knotted easily behind her head.

“Don’t be long,” she whispered.

This is wrong, and stupid. The publishers backing McGraw are big names. They have big money and the means to sue. And after developing a lucrative online market for herself, Harner has just torpedoed it big time with this mistake, and don’t think Amazon and Barnes and Noble will not hear of it. Don’t piss off your distributors folks!

On a moral level, it is heinous, of course. The same sort of thing has been going in fanfic circles, one writer stealing another’s work, and claiming it as their own. Since many romance writers have started out writing fanfic, I hate to say that it seems a learned behavior that can be enacted without consequences.

It’s all courtesy of the digital age where it’s extremely easy to search, replace, cut, and paste. Granted, it may have happened in pre-word processor days, but since it was a lot more time-consuming to type out a copy back then, such cases must have fewer.

I hate to say it, also, but the Romance genre is particularly ripe for this sort of plagiarism. It’s a huge market, with lots of books, lots of writers, lots of interchangable plots and characters, and lots of subgenres that come in and out of fashion, each flooded with its own tropes and character types. (This isn’t a criticism; it just is.) The Men’s Adventure genre was once just as huge as Romance is today, and through the 1940s, 50s, and 60s had a similar reliance on a limited set of tropes. If it had remained just as huge today, I’ve no doubt it would have plagiarizers at work for a quick buck.

This brings up some other questions. Would male readers and writers care as much? Would the code of conduct be different? Would the charges be taken more seriously, since it’s a male dominated genre and more worthy of “respect”?

Things to think about, certainly.

The Tale of Lassok and Zairbhreena is available now! You can find it on Amazon.com exclusively for three months. (And if you have Kindle Unlimited, it is free.)

I still need to tweak the formatting a little, but it’s enjoyable just  the way it is now.

What is it about? A tale of love and betrayal in the Arabian Nights vein, speckled with sex, sorcery, and adventure. Prince Lassok claims a bride in the luscious Princess Zairbhreena, but Lassok’s ex-lover Jaseloris has other plans. Drawing a magic wand, she turns her rival into STONE:

As the princess stood gazing in the mirror Jaseloris reached for a slim casket she kept hidden in a pocket of her robe. Her father had given it to her years ago, realizing the dangers that could befall his daughter while she bartered valuable gems alone in the bazaar. He had bought it at great expense from a sorceress and told Jaseloris she should only use it in the severest danger.

Jaseloris flipped open the casket. Inside was a rod of chrysoprase. She took it firmly in her right hand and pointed it at the princess, muttering the words her father had taught her.

A gout of crackling energy poured from the tip of the wand, jerking Jaseloris backwards. It struck the princess in a blinding flash of light and heat. The princess’s cries were strangled as the energy enveloped her, batting her about like a fly in a bottle. Her legs and arms flailed wildly as her clothing burned off and even her hair began to smolder. Yet her flesh was not consumed, though it took on a pale yellow hue.
She began to spin. Around and around she went, like a lump of clay on a potter’s wheel. Her nude body went straight as a pin: her arms compressed against her sides and her slim legs pressed tightly together, toes pointed down. Her head and chin lifted so she stared directly in front of her, incredulous fear in her eyes.

She spun faster and faster. Her features were a blur, her figure a spindle. Yet even with the speed of her rotation Jaseloris saw her soft white flesh take on the hard glaze of stone.

There came a second flash of light even more blinding than the first. Jaseloris let out a shrill scream of terror and shielded her eyes. And opened them to see the nude, petrified body of the princess fall with a heavy thump on the soft, bundled carpets below her.

Adventure ensues as the prince tries to track her down and restore her. There’s romance, intrigue, sex, sandstorms, dragons, gorgons, and efreet! Will Prince Lassok find his beloved? Can he transform her back?

I’ve long held a fascination with the idea of people being turned into stone, and this story, inspired partly by the wonderful fantasy fiction of Tanith Lee, explores the idea of just what might happen to that still-conscious but essentially helpless and immobile person.